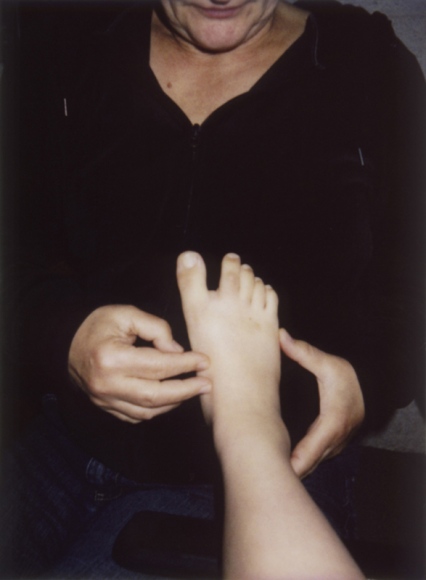 ‘this is not about you’ is a project on which I have been working continuously since 2005. I started photographing my sister Pim, who has Down syndrome, as a way of capturing her growing up. I became intrigued by the way Down syndrome and other disabilities are presented and wanted to understand my sisters view on the world. To provide a layered and contextual imagery of someone with a mental disability not only my representation of my sister is important but also my sister’s representation of her environment and my mother’s representation of my sister. ‘this is not about you’ consists therefore of three story lines that embody three approaches and therefore different ways of representation. It contains photographs made by me as a photographer, images made by my sister with a polaroid camera, and finally it covers pictures from the family album made by my mother.

The images above are a very small selection of the project and are shown in a non-linear order.

The first batch of images my sister made were published in a small artist book for the occasion of an exhibition at the Breda's City Museum in 2010.

In the summer of 2009 I gave my sister Pim a polaroid camera. During the next five months she took pictures of everything she was fond of. There were no restrictions. I collected the polaroids she took every week and tried to understand her view at the world. After a while I began to categorize her pictures.

Ted Oonk’s autobiographical engagement sets off thematical clusters that have been dealt with in (the discourse of) snapshot photography, for which the family album is the ideal resting place. Personal and social history come together in ways that these photographs as snapshots (from daily life) become facilitators of social relations; they constitute an invitation to intimacy, a nostalgic call to reminisce, or a gesture of social inclusion.

At the outset, though, Oonk makes it clear that her intent is not exclusively to create a tool for members of subaltern or marginalized groups to construct alternative visual cultures to those perpetuated by the mainstream. Of course the way she opens up the possibility for her sister to gaze openly and autonomously (and to have her hopefully included in a real exhibition or museum), seduces the viewer to think about how we are used to criticize our own (privileged, but limited and distorted) gazings, but how little we know about the ways ‘marginalized’ groups view their surrounding worlds. On the one hand, the tripartite presentation of the project (see more below) sharpens our understanding of whom is photographing who, but is on the other hand, less clear on what belongs to art and (amateurish) snapshot culture. Oonk thereby tackles the notion of ‘artistic mastery’ so often presumed in the photographic act. Although instigated by the ‘professional’ photographer (Oonk herself, if we leave out the snapshot-decisions of the mother before Oonk became that photographer), the whole project is a collaborative one, in which the 3-partite set-up is proof of the (in)direct cooperation of her sister and mother.  The photographic act is a shared initiative, not only in the sense that for instance the sister ‘agrees’ in being the subject, but in the sense that the three of them become (equal) ‘authors’ in this documentary on closeness, intimacy or even mutual affection.

Apart from this, there’s another strategy that marks ‘this is not about you’, which appears to be not so ‘tripartite’ after all. The choice for this ‘fleeting’ format has, first of all, to do with the fluidity of the snapshot’s social network, of course. As relationships and social dynamics shift through time, also the audience of a particular image may change. The network reiterates and revises its identity through snapshot viewing. Of course, the main issue with presenting snapshots (or family albums, for that matter) is that there must be ‘other’ images that are not afforded the privilege, that are edited out of the visual (hi)story. Oonk includes the pictures that would in a normal setting (or again, family album) be left out because they are ‘just not good enough’. Now ‘editing’ itself becomes an actor on the playground where 3 official, seemingly autonomous, ‘photographers’ move in that challenging zone in between the discourse of the museum and the characteristics of snapshot photography.